“There’s a famous Harvard Business School study on a woman named Heidi Roizen. And she’s an operator in a company in Silicon Valley, and she uses her contacts to become a very successful venture capitalist. In 2002 — not so long ago — a professor who was then at Columbia University took that case and made it [Howard] Roizen. And he gave the case out, both of them, to two groups of students. He changed exactly one word: “Heidi” to “Howard.” But that one word made a really big difference. He then surveyed the students, and the good news was the students, both men and women, thought Heidi and Howard were equally competent, and that’s good. The bad news was that everyone liked Howard. He’s a great guy. You want to work for him. You want to spend the day fishing with him. But Heidi? Not so sure. She’s a little out for herself. She’s a little political. You’re not sure you’d want to work for her.”

Inspired, supercharged with hope,
Only to discover that I could not cope
With the senseless comments galore:

Great comment, but in reality,
I present a counterexample seriously,
I am a woman with neither preference,
Therefore, your statement is an invalid inference. 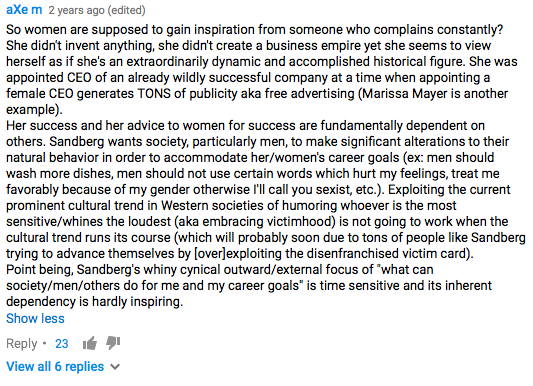 A woman who received highest distinction from Harvard,
Consultant at McKinsey,
Worked for the U.S. Secretary of Treasury,
Served as VP of global online sales at Google additionally.
So how can women gain inspiration
From this extraordinarily unaccomplished figure?
What an accommodation,
To natural behavior quite the perturbation,
For men to wash more dishes,
aXe m, why don’t we listen instead to your wishes?

Dear Atlas,
Please brush up on your history,
Especially Curie, Herschel and Goodall sincerely,
Burnell, Rosalind and a sprinkle of Meitner.
Lovelace, McClintock and Hopper,
I could go on and on, for women continued to seek science,
In the face of vast societal and economic bias.

I see that you are a time traveller in disguise,
Unable to shed your 18th century guise.
Let me lend you a hand,
It is imperative to understand
That there exist no such natural roles,
And history will always look unkindly upon those souls
Who stand on the side of such oppressive absurdity.

Want to nerd out? Need inspiration from role models? Rant about sexism in the comments section?  You’ve come to the right place!